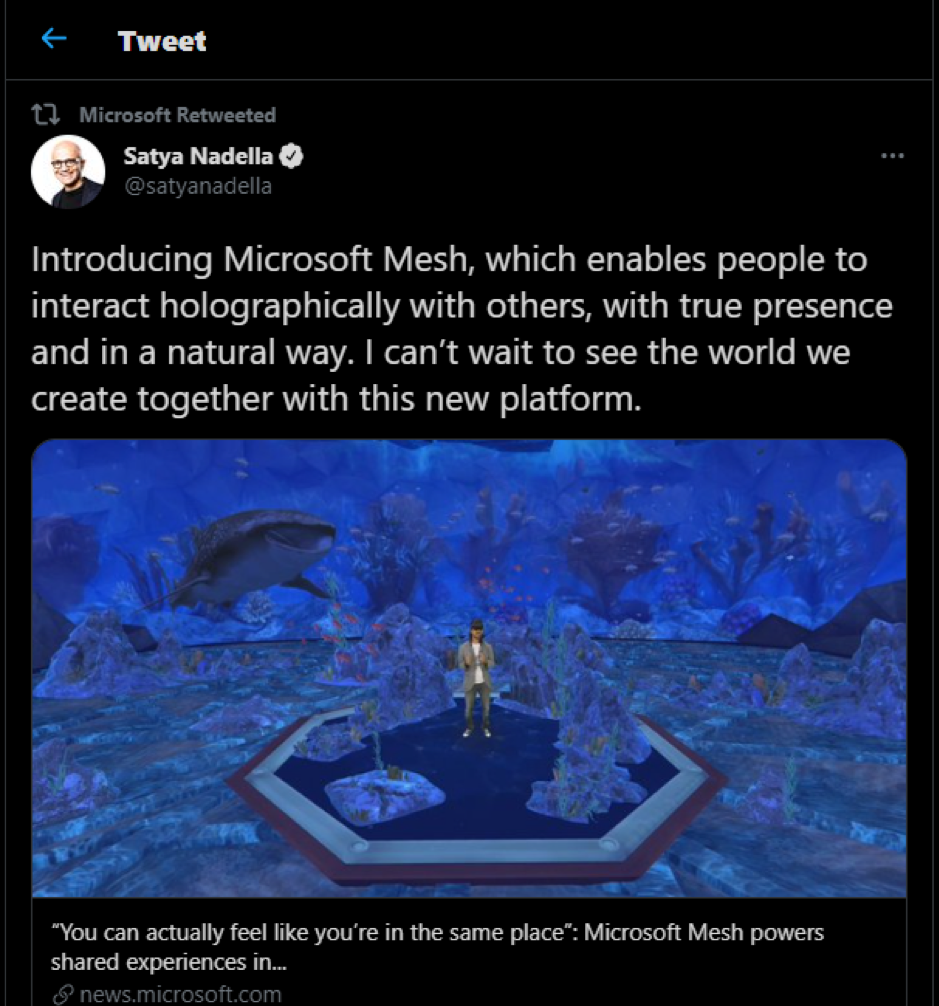 On Tuesday, Microsoft just launched a new way in which we will meet in the future. Think of this as a colleague floating in your room, surgery room, office, or meeting conferences like holograms. Distant colleagues will be able to holoport and share the same room with you in an augmented reality using the mesh platform powered by Azure.

New this year: Experience the #MSIgnite Keynote in mixed reality through AltspaceVR! Join Satya Nadella and Alex Kipman during an immersive keynote like never before and it's all at #MSIgnite: https://t.co/qPPcS32gUl pic.twitter.com/fiIIpJeZgS

During the launch at Microsoft’s virtual ignite conference, Alex Kipman, Microsoft’s technical fellow, demonstrated the experience by holding an augmented reality meeting with John Hanke and James Cameron. In the meeting, Kipman’s virtual body floating like an avatar shared the same platform where the three could interact as if they were physically present in one room.

The augmented reality meeting takes place with the aid of Hololens, Oculus Quest 2, computers, mobile phones, and the communication gadgets that are mesh-app enabled.

Kipman also stated that the Mesh will also be integrated into the Microsoft Teams app, allowing people worldwide to meet into virtual space as though they were physically together. “In a world of hybrid work, where ‘here’ can literally be anywhere and headquarters are no longer tied to a single physical location, Mesh will allow organizations to host mixed reality gatherings with everyone in the same room.”

With Microsoft’s vision of the future meeting space, working will seem a lot more convenient and fun. A fellow doctor could aid in your operation by guiding you as though he was there; an engineer could also help fix something while far away but with you in the same room in the virtual space.

The mesh platform’s security also ranking high; the tech giant attributed the security, privacy-protection, and large computational data and the mixed reality services to the Azure. The platform is built on the Azure cloud, and as Kipman says, “The content is not inside my device or inside my application. The holographic content is in the cloud, and I just need the special lenses that allow me to see it.”

In addition to that, Microsoft also unveiled a set of two applications for the platform’s unveiling. The Mesh app for the Hololens and Mesh-enabled version of AltspaceVR launched the new mixed reality meeting platform on Tuesday.